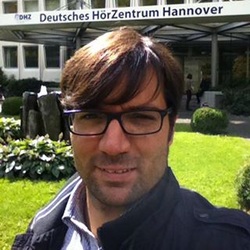 Waldo Nogueira is currently working at the Auditory Prosthetic Group of the German Hearing Center within the Medical University Hannover.

He received his Ing. degree (M. Sc) in Telecommunication Engineering from the Technical University of Catalonia in 2003. After completing his Master Thesis, he worked toward his PhD degree at the Laboratory of Information Technology of the Leibniz University of Hannover.

During his PhD he developed several strategies for cochlear implants, some of them have been commercialized like the MP3000 by Cochlear Ltd. Furthermore, he made extensive work for designing evaluation methods to assess sound performance with cochlear implants  using models of the electrically stimulated auditory nerve combined with automatic speech recognizers. This work finished with the publication of his Dissertation "Design and Evaluation of Signal Processing Strategies for Cochlear Implants based on Psychoacoustic Masking and Current Steering".

In 2008 he joined the European R&D centre of Advanced Bionics in Belgium as a Research Engineer and  In 2009 he became Principal Research Engineer with emphasis in signal processing at the European Centre of the same company in Hannover (Germany). His main tasks consisted of research and development of new audio signal processing algorithms for cochlear implants, development of research interfaces, electrophysiology and management of research projects with external R&D centres.

In September 2011 he moved back to academia joining the Music Technology Group of the Universitat Pompeu Fabra where he started a research line on music signal processing for cochlear implants. The main goals of the project were to improve sound perception with emphasis in music using Cochlear Implant and Hearing Instruments.

In September 2013 he became Junior Professor at the German Hearing Center of the Hannover Medical School where he is leading the Auditory Prosthetic Group of the Excellence Initiative project Hearing4all.  Since 2014 he is also an affiliate of the Institute for Information Processing of the Leibniz University Hannover.